A walk around Hob Hey Wood in spring, starting at Langdale Way. At a fast pace, it could be covered in about 45 minutes, but allow 1.5 hours to take in all of the beautiful sights (and smells) of the season.

PARKING: Limited parking is available on Townfield Lane and Langdale Way (shown as ‘P’ on the map). 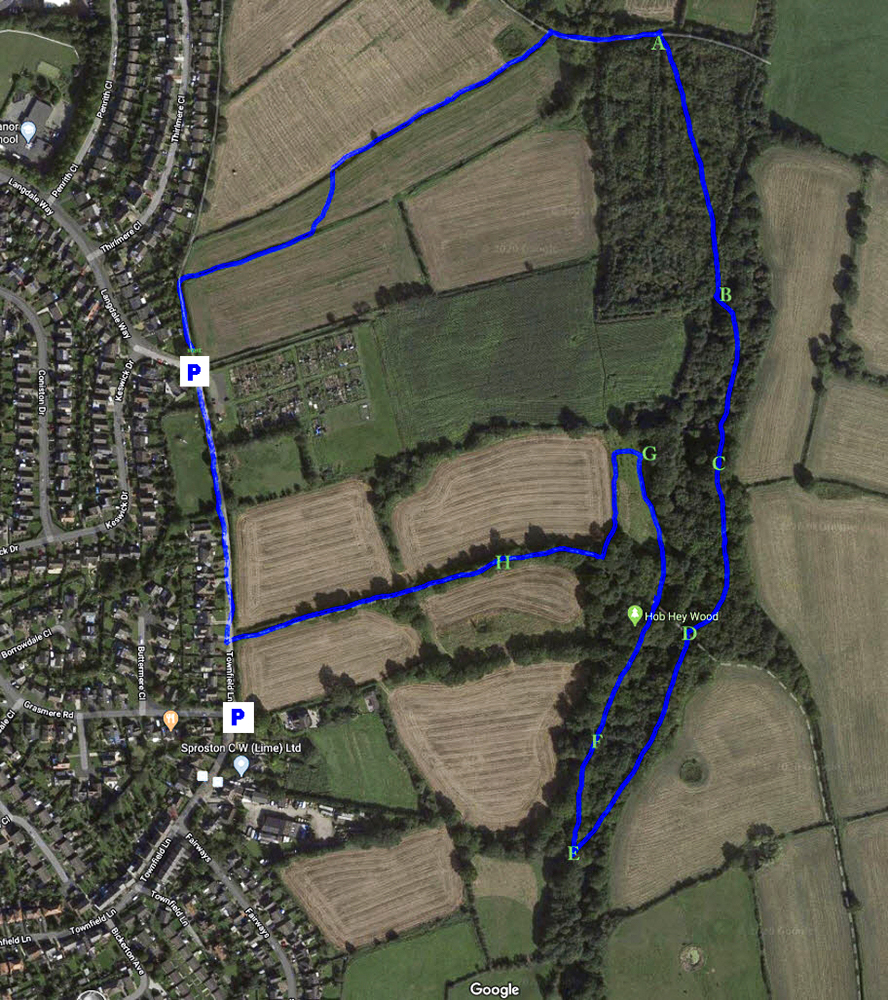 Follow the field edge down to the bottom, go through a gap in the hedge down onto a path. Turn right and follow the path for 100 metres. You will come to a large fallen metal gate.

This is the entrance to the ‘new wood’ (Point ‘A’). Originally a field, nineteen years ago a local businessman bought it and planted 2,000 trees of eleven different native species. He created paths for the public to use. What a wonderful thing to do. This is a good area to spot bullfinches, one of our most colourful birds.

Follow the large path through the wood until it comes out at a clearing next to a bridge over the stream (Point ‘B’). This is the entrance to Hob Hey Wood, Frodsham’s ancient woodland. To be classified like this a wood must be at least 400 years old. Hob Hey is probably much older as it was part of the ancient forests of Mara and Mondrem that covered much of medieval Cheshire. Now there are only a few remnants left such as Hob Hey.

Ancient woodland is Britain’s most biodiverse habitat, home to many thousands of species of plant, animal and insect. It is a fragile habitat, easily destroyed by humans. Once an ancient woodland is gone it cannot be replaced. Hob Hey is therefore extremely important to the people of Frodsham and the wildlife that calls it home.

Go over the bridge and you’ll see a small clearing to the right. In spring this is carpeted with wild garlic, the smell of which will be obvious. There are a couple of ancient, partly hollow ash trees here, bent into weird shapes over the years. Trees like this are home to bats. We have at least seven species of bat living in the wood including the very rare Nathusius’ pipistrelle. An evening visit with a bat detector will reveal just how many bats rely on this ancient landscape.

Follow the path away from the bridge (Point ‘C’). This has a diverse range of flowers with a variety of colours. In addition to the white of the wild garlic, isolated blooms of red campion can be found. Small patches of common dog violet are found here. Less showy than bluebells, but simply gorgeous in an understated way. The lemon coloured yellow pimpernel appears in rafts on the edge of the path in late spring. Blooms aren’t limited to flowers, however. Halfway along this path there is a huge crab apple tree. In late April/early May this gives a spectacular display of apple blossom, a cascade of white blooms arching towards the ground.

Lesser celandine carpets the wood with its pretty little flowers. Also known as ‘pilewort’ due to the resemblance of its tubers to piles, it was used to treat this condition!

Wood sorrel, found in little groups in the wood is known as ‘false shamrock’ due to the shape of its leaves. It is edible and can be made into a lemony tea when dried. All of these flowers would have been very familiar to medieval people. Now of course, we’ve lost most of our ancient woodland and few people know of their history and uses.

At the end of this path, you come to a clearing with a picnic table and benches, and the main bridge (Point ‘D’). This is a great place to rest and listen to the burbling stream and singing birds. Many species breed in Hob Hey, from raucous jackdaws to cryptic treecreepers, as well as the buzzards and sparrowhawks that prey on them. There will be birds feeding their young here, with nests in tree holes and ivy. Can you see any?

Cross over the bridle path (marked with a dotted line on the map) and into the northern part of the wood. There are two paths here, take the left one for a long loop of the northern wood. Look out for a spectacular plant here, ‘lords and ladies’. This has many names e.g. ‘cows and bulls’, ‘Adam and Eve’, most referring to the plants likeness to male and female genitalia! In autumn it produces spectacular red berries which are poisonous and actually the most common reason for hospital visits due to poisoning (so look, don’t touch)!

This path is excellent for Hob Hey’s crowning glory; its bluebells! Thousands of these flowers carpet both sides of the path, giving a beautiful display, one that is almost uniquely British. We have 50% of the world’s bluebells and Britain is the best place to see them. As you look at them think of this: there are billions of people across the world who don’t have access to a bluebell wood. We have one on our doorstep.

At the end of the path is a horizontal horse chestnut tree (Point ‘E’). This has not fallen, it’s grown this way and produces many conkers in the autumn. Although there are no benches here (yet!) you can lean against the chestnut. And it’s worth doing so as this is one of the most isolated parts of the wood. Deep in a valley, surrounded by trees, the only sounds you’ll probably hear are birdsong, the wind in the trees, and the babbling little brook. Close your eyes and listen. A lovely way to spend a few minutes. Spending time in nature this way is known as ‘Forest Bathing’. This has been shown to have proven health benefits such as reduced blood pressure, boosted immune system and improved sleep! Amazing.

Go over the bridge and up the steps to another path which leads back to the main bridge. About halfway there, there’s another set of steps and a huge oak tree that dominates the skyline (Point ‘F’).

This oak is over 200 years old. When the Battle of Waterloo was being fought, this tree was a sapling. Imagine all that’s happened in the past two centuries; this tree has endured it all and is still here today. In 2019 both great spotted woodpeckers and nuthatches nested in this tree so it’s worth looking out for them.

Carry on this path and you’ll see another superb display of bluebells before arriving back at the main bridge. Take the wooden gate opposite into the orchard (Point ‘G’). This is one of Frodsham’s community orchards and contains trees, the fruit of which is for people to pick and enjoy (later in the summer). The lower part of the orchard, full of thistles and hogweed may look a bit messy but it is a haven for wildlife. Bees, hoverflies, dragonflies and butterflies cover the area in late spring to summer.

We’ve lost 99% of our wildflower meadows in Britain, so we’re hoping to improve this area and encourage wildflowers to grow again. I counted 13 species of butterfly here on one day. The purple hairstreak can be found here, too. This is a very uncommon butterfly which lives on oak. Most people have never seen one but Hob Hey is home to them.

Follow the orchard round, and take the stone steps down to the bridle path and turn right (Point ‘H’). This takes you up to Townfield Lane. As you travel along look out for mounds of earth with D- shaped holes in them on the sides of the bridle path. These are badger setts. Hob Hey has a thriving population of badgers that find the woodland to their liking. As you look at the sett entrance, reflect that just a few feet away, a family of badgers will be asleep, just waiting for dusk to arrive so they can go out, just after humans have gone home.

At the top of the bridle path turn right, to get back the start of the walk.

This walk is reproduced by kind permission of the Hob Hey Wood Friends Group.